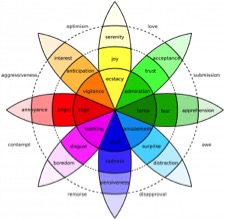 According to the wheel of emotions created by the psychologist Robert Plutchik in 1980, angry and fearful emotions are diametrically opposed to each other, as approach and avoidance responses respectively to harmful stimuli.
Plutchik’s is one of many different models suggesting the existence of certain “basic” or “primary” emotions. Such lists almost always include both fear and anger. Historically, fearful and angry emotions have been related to each other in different ways – sometimes opposed, sometimes complementary, and sometimes in another way. For Thomas Aquinas, for instance, ira is alone among the passions in having no contrary.
Although basic emotion theorists tend to treat “fear” and “anger” as singular emotions, even Plutchik’s wheel includes three different intensities for each emotion – from annoyance to rage and from apprehension to terror. Historians tend to be more attuned to cultural specificities of emotional language, concepts and expression, hence the emphasis in this conference on “fears” and “angers” in the plural to encourage a wide range of papers on all sorts of fear-like and anger-like feelings and behaviours in different cultures and periods.
The conference aims to bring humanities scholars of all periods into conversation with each other and with experts in the contemporary study of emotions, including neuroscientists, psychologists, philosophers, and linguists.
Papers can address either a single emotion in the fearful or angry categories, or examine the relationship between the two. Possible topics could include:
–       The varieties of fear – from anxiety and angst to mortal fear and terror. What were the objects and causes of fearful emotions in different times and places?
–       The varieties of anger – from annoyance and irritation to ire, vengeance, fury and rage. The different objects and causes of angry emotions.
–       The history of terms and concepts for different fearful or angry emotions.
–       Visual and literary representations.
–       Material culture and emotions.
–       Theories of fearful and angry emotions in the histories of science, medicine, philosophy, theology, and other learned discourses.
–       The relationships between fearful and angry emotions. Does one cause the other? Are they complementary or opposite?
–       What historical and contemporary approaches to fear or anger can learn from each other.
–       Historical and contemporary debates about the number and identity of the so-called basic or primary emotions.
–       Terror and rage as political emotions (past and present).
Fears and Angers: Historical and Contemporary Perspectives will extend over two days, including plenary sessions by distinguished invited speakers, Round Table discussion groups, and numerous panels consisting of three 20 minute papers with discussion. One or more refereed publications of essays based on proceedings are expected.
The conference website is available here.