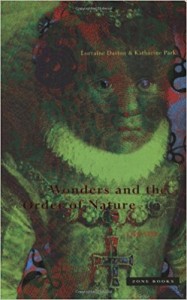 A wealth of literature has shed light on religious, philosophical, scientific and medical concepts of extraordinary bodies, wonders and monsters in the sixteenth, seventeenth and eighteenth centuries. Lorraine Daston and Katharine Park have been tremendously influential with their Wonders and the order of nature (1998) and in many ways contributed to our understanding of emotions and the monstrous before 1750. One of their suggestions is that there was no disenchantment, or clear pattern of naturalization, of monsters in the seventeenth and eighteenth centuries. Monstrous births were explained by natural causes, such as a narrow womb or an excess of seed, already by medieval writers whereas they could still be read as divine signs in the late seventeenth century. No linear story took monsters from an older religious framework to a newer naturalistic one or from prodigies to wonders to naturalized objects. Wonders eventually lost their position as cherished elements in European elite culture but that had nothing to do with secularization, the “rise of science”, or some triumph of rational thinking. Rather, the emergence of strict norms and absolute regularity, both of nature’s customs and God’s rules, is a better description of this shift. Nature’s habits hardened into inviolable laws in the late seventeenth century and Daston and Park picture “the subordination of anomalies to watertight natural laws, of nature to God, and of citizens and Christians to established authority”. Monsters became, in an anatomical framework, regarded as organisms that had failed to achieve their perfect final form. Their value now depended, not as earlier on their rarity or singularity, but on the body’s capacity to reveal still more rigid regularities in nature.

The history of monsters as submitted, not to secular powers, but to strict norms in early eighteenth century nature, culture and religion is intriguing and a number of questions can be raised. Were all bodies normalized by 1750 or can monsters still be found in science and medicine in the late eighteenth century? What else do we know about bodies and breaches of the expected in the early modern period? In the field of the deviant, has there been a general shift from natural rules to moral orders, from bodies to behavior? What other aspects of corporeality are there that can help us frame early modern nature and culture, to grasp its orders and disorders?
The purpose of this workshop is to bring together scholars from different fields to discuss current research on extraordinary bodies in natural history, medicine, law, religion, philosophy, and travel literature in the early modern period. It will comprise of paper presentations and a concluding general discussion.

We especially welcome research relating to topics such as:
Abstracts for papers of 200-300 words should be submitted no later than June 1, 2017 to Helena Franzén. Please provide your full name, institutional affiliation, and contact details.
The format of the workshop will not allow for more than c. 10 papers. We will select the abstracts to be presented at the meeting considering original research and relevance to the theme of the workshop. By June 15, 2017 applicants will be notified if their papers have been accepted or not.